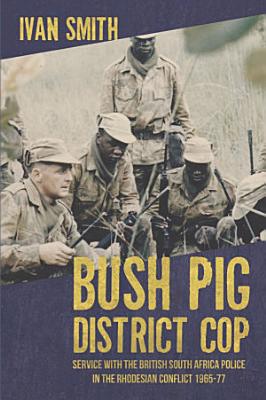 This is the story of one man's service in the British South Africa Police of Rhodesia during his service of nearly fifteen years, between the years 1965 and 1979, and in many ways forms a sequel to the author's book Mad Dog Killers. The struggle to keep Rhodesia out of black nationalist hands started in late 1964 and ended with the Mugabe regime in 1982. It is also a story of a policeman engaged in that war as a member of the paramilitary BSAP Support unit, the Police Anti-Terrorist Unit and as an ordinary member of the force that had always been designated the country's first line of defense. Most of the service was on remote rural district stations, often in the middle of the "front line". The account tells of one man's learning to be a policeman and a police public prosecutor and about the eccentricities of some of the circuit magistrates. A policeman has a lot to learn about life, and in the BSA Police he was expected to jump in at the deep end from the start. It is also the story of the strange struggle by Rhodesian-born policemen in a force where the majority were English-born, at a time when Rhodesia was in rebellion against Britain. The author's senior officers, though fiercely loyal to the force, were British and required to join the rebellion. It tells of his resentment at the lack of drive by senior officers in the fight against terrorist atrocities. There is additional insight into the Utopian life in Rhodesia, especially in rural areas, when it was still possible to hunt buck for the police mess rations, where there was no electricity or other modern amenities and where the single quarters were in ancient buildings enclosed by a wraparound gauzed-in veranda - a life gone now forever. It is also a story of a young man who grew up in Salisbury, his sexual excesses and sadness. The British Queen Mother was patron of the force all her life and was very proud of her association with it.

Authors: Ivan Smith
Categories: History
This is the story of one man's service in the British South Africa Police of Rhodesia during his service of nearly fifteen years, between the years 1965 and 197

Authors: Luise White
Categories: History
In Fighting and Writing Luise White brings the force of her historical insight to bear on the many war memoirs published by white soldiers who fought for Rhodes

Authors: John Strickland
Categories: History
This is a collection of administrative dispatches from the 1910s through the early 1960s which illuminate not only rural life in Hong Kong but also Hong Kong go

Inside China – From the Great Leap Backward to Huawei

Authors: Chris Fraser OBE
Categories: Biography & Autobiography
This memoir is written from a Chinese speaker's and insider's viewpoint stretching over fifty years of working in and around China in both a public and private

Report on the Administration of the Andaman and Nicobar Islands and the Penal Settlement of Port Blair ...

A Servant of Sarawak: Reminiscences of a Crown Counsel in 1950s Borneo

Authors: Peter Mooney
Categories: Biography & Autobiography
In 1953, Peter Mooney decided to forsake the stately precincts of Parliament House and the Advocates Library in the historic city of Edinburgh and accept the po

The Handbook of Tanganyika

Authors: Margaret Mead
Categories: Social Science
For approximately eight months during 1931-1932, anthropologist Margaret Mead lived with and studied the Mountain Arapesh-a segment of the population of the Eas