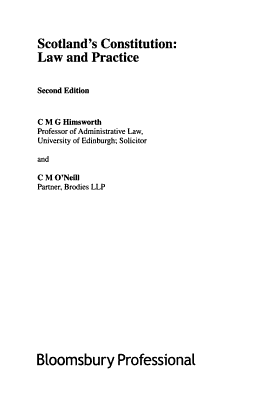 Scotland.s Constitution: Law and Practice is a clear, comprehensive account of the Scottish dimension of constitutional law within its UK and European context. It describes and analyses constitutional arrangements while integrating that analysis with a general background to constitutional law and the UK institutions which have a continuing relevance for the government of Scotland. This highly regarded text considers law-making powers for Scotland, the legislative process at Westminster and at Holyrood, the accountability and scrutiny of government, the independence of the judiciary and the role of the courts in interpreting and adjudicating upon constitutional and administrative law questions. The second edition has been fully updated throughout and includes a wholly new chapter, entitled Citizen and State, covering important recent developments in human rights and civil liberties. Account is also taken of the work of the Calman Commission, the current Scottish government.s .National Conversation. and developments in the House of Lords and the Supreme Court. Further new material relating to data protection and freedom of information, elections and the reform of the tribunals system has been included. This text provides an essential introduction to constitutional law for law students and for others with a general interest in this subject. Chris Himsworth is Professor of Administrative Law at the University of Edinburgh and is a Solicitor admitted in Scotland and in England and Wales. Christine O.Neill is a Partner at Brodies LLP. Contents: Constitutions and Constitutional Law; Constitutional Law and Constitutional Values; The Scottish Constitutional Context; The UK and Scottish Parliaments; Law-Making Competences for Scotland; The UK Government and the Scottish Executive; Local Authorities and Other Public Bodies; Law-Making Procedures; The Parliamentary Accountability of Government; Public Finance; Courts and the Independence of Judiciary; Public Law Adjudication; I

Authors: Chris Himsworth
Categories: Law
Scotland.s Constitution: Law and Practice is a clear, comprehensive account of the Scottish dimension of constitutional law within its UK and European context.

Authors: W. Elliot Bulmer
Categories: History
Before the independence referendum in 2014, the First Minister of Scotland Alex Salmond promised a written constitution for Scotland in the event of a 'Yes' vot

Authors: Clark Bryan Keegan Gerard
Categories: Law
Whether youOCOre studying Law in Scotland or looking to convert to Scots law, this invaluable guide will quickly equip you with all the basics of the Scottish l

Authors: Ian Loveland
Categories: Law
Constitutional Law, Administrative Law, and Human Rights provides an introduction to public law which draws on developments in politics, the law and society to

Law Making and the Scottish Parliament

Authors: Elaine E Sutherland
Categories: Law
A study of legislative developments in areas of law and policy devolved to the Scottish Parliament.

British Government and the Constitution

Authors: Colin Turpin
Categories: Law
The first five editions of this well established book were written by Colin Turpin. This new edition has been prepared jointly by Colin Turpin and Adam Tomkins.

Authors: Neil Walker
Categories: Law
A Gedenkschrift to one of Scotland's most prominent jurists and legal thinkers.