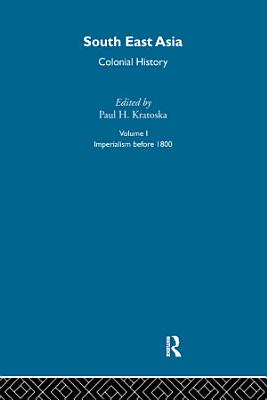 First published in 2004. The six volumes that make up this set provide an overview of colonialism in South East Asia. The first volume deals with Portuguese, Spanish and Dutch Imperialism before 1800, the second with empire-building during the Nineteenth Century, and the third with the imperial heyday in the early Twentieth Century. The remaining volumes are devoted to the decline of empire, covering nationalism and the Japanese challenge to the Western presence in the region, and the transition to independence. The authors whose works are anthologised include both official participants, and scholars who wrote about events from a more detached perspective. Wherever possible, authors have been chosen who had first-hand experience in the region. Volume I incudes Imperialism in South East Asia before 1800.

Authors: Paul Kratoska
Categories: History
First published in 2004. The six volumes that make up this set provide an overview of colonialism in South East Asia. The first volume deals with Portuguese, Sp

Authors: Patrick Truck
Categories: History
First published in 2004. The purpose of this reference work is to offer a range of materials covering the history of the East India Company during the two and a

The Handbook of Maritime Economics and Business

Authors: Costas Grammenos
Categories: Law
This book is the founding title in the Grammenos Library. The diversity of the subjects covered is unique and the results of research developed over many years

Authors: Natalie Klein
Categories: Law
Maritime security is of vital importance to Australia and New Zealand as both countries depend on maritime transport for their economic survival. Since the even

Guide to Microforms in Print

Authors: N. Wijnolst
Categories: Technology & Engineering
There were not many textbooks on shipping available for the students in the early 1990s. Therefore it was decided to write Shipping in 1996. One year earlier, N

Report on the Maritime Trade of Bengal ...

Report on the Maritime Trade of the Province of Sind