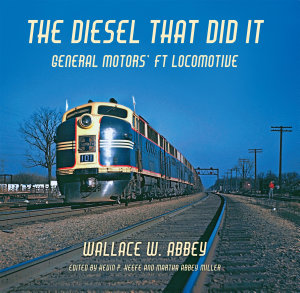 GET BOOK
The Diesel That Did It Book Description:

The Diesel That Did It tells the story of the legendary diesel-electric locomotive, the FT. As war loomed in 1939, American railroads were on the precipice of railroad transformation. In an obscure factory in La Grange, Illinois, a group of gifted engineers and designers were planning a revolution that would shake railroading to its foundations and eventually put the steam locomotive out of business. Their creation, the FT, was a diesel-electric, semi-streamlined freight engine. The FT would establish a new standard for reliability, flexibility, and cost, but its arrival unsettled many railroad employees and gave fresh ammunition to their labor unions, who believed that it threatened a century-old culture. Wallace W. Abbey's The Diesel That Did It is the story of a revolution. He explores how EMC (and its successor Electro-Motive Division of General Motors) conceived the FT, and how it ultimately emerged as the dominant locomotive power plant for 20 years. However, for Abbey, the history of the Santa Fe Railway and the FT go hand in hand. The Diesel That Did It also offers a penetrating look at how the great American railroad, at the height of its Super Chief glamor, threw its conservative mechanical traditions aside to bet big on the diesel. Showcasing more than 140 exquisite photographs by Abbey and other noted photographers, The Diesel That Did It is a captivating story not to be missed by railroaders and railfans.

The Diesel That Did It

Authors: Wallace W. Abbey
Categories: Technology & Engineering
The Diesel That Did It tells the story of the legendary diesel-electric locomotive, the FT. As war loomed in 1939, American railroads were on the precipice of r

A Study of the Antitrust Laws

Awards of the Second Division, National Railroad Adjustment Board, with Index

Decisions and Orders of the National Labor Relations Board

Hearings on Military Posture and H.R. 5965 (H.R. 6030), Department of Defense Authorization for Appropriations for Fiscal Year 1983 Before the Committee on Armed Services, House of Representatives, Ninety-seventh Congress, Second Session